A Lawyer’s Odyssey: Apartheid, Mandela and Beyond 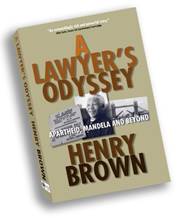 First published in South Africa, my book is now available in the U.K. and elsewhere outside S.A.

It is a personal memoir, covering my experience of legal life in apartheid South Africa, including representing Nelson Mandela when he was a prisoner on Robben Island, Winnie Mandela, Albie Sachs (who was instrumental in developing the new S.A. constitution), the widow of Imam Haron, who died in detention, and many others involved in the Struggle. It also encompasses my work in the U.K., including representing Pan Africanist Congress founder Robert Sobukwe, working for SWAPO and crossing paths with notorious S.A. spy Craig Williamson, and my move into developing mediation and ADR in the U.K. and elsewhere. South African reviews in the press and from the Nelson Mandela Foundation are positive and enthusiastic.
More information and orders: https://lawyersodyssey.mystrikingly.com

Henry co-wrote this comprehensive work on alternative dispute resolution with Arthur Marriott in 1993, since which time there have been three further editions, with a 4th edition published in late summer 2018 co-authored by Shirley Shipman, Ben Waters and Bill Wood QC, with Henry as Consultant Editor.

This work has been sold in over 60 countries and is widely cited by way of authority.

Henry co-created this book and DVD with Neil Dawson and Brenda McHugh in 2006 for the national family lawyers’ organisation Resolution (then called the Solicitors Family Law Association). It provides an interdisciplinary training programme for family lawyers dealing with difficult clients offering practical and theoretical legal and therapeutic advice.

Psychology, Emotion and Intuition in Work Relationships: The Head, Heart and Gut Professional

With psychotherapists Neil Dawson and Brenda McHugh, his co-authors on Managing Difficult Divorce Relationships, Henry has written a professional development book published by Routledge (Taylor and Francis) in March 2018. Consultants to the book are Professor Peter Fonagy, chief executive of the Anna Freud Centre, and neuroscientist Dr Rohan da Silva.

The publisher’s description refers to it as “based on a sound theoretical perspective combined with practical guidance” and highlighting “the increasing importance of human relations in professional life. In modern society, all those who work with or provide services to others are increasingly called upon to be not just technical experts, but also ‘head, heart and gut professionals’ – who can work and relate to others with their head, heart, and gut.”

Other Writing and Reports

Henry has written articles, reviews and academic papers and has contributed chapters to various books including Dispute Resolution Methods, The Comparative Law Yearbook of International Business; Conflict management in the Family Field; Clinical Risk Management; Re-rooted lives: inter-disciplinary work within the family justice system; and Mediating IT disputes in the UK.

He has edited and contributed to Danish books including Sustainable Society; What happened to ‘the child’s best interest’ in Denmark?; and the Cookbook for Conflict Resolvers: No wisdom on an empty stomach.

Henry has written or contributed to various reports, including writing the initial Report on Alternative Dispute Resolution for the Law Society of England and Wales in 1991, and as Project Consultant writing a Report in 2002 for the National Health Service Litigation Authority (NHSLA), Action for Victims of Medical Accidents (AVMA) and the Centre for Effective Dispute Resolution (CEDR) regarding the use of mediation in clinical negligence disputes.